Hachi had been waiting for his master after his death.

This became a famous story and it was made into Japanese and Hollywood films and many books were published.

By the way, did you know?

He was born in November 1923 at Mr. Giichi Saito’s home in Ooshinai in Odate City. At that time, Dr. Eisaburo Ueno, a professor of agricultural science of Tokyo Imperial University, was looking for a pure Japanese dog. Then, his student, Chiyomatsu Yomase came up with the idea to get a dog from Reizou Kurita’s friend, Mr. Saito. So then in January 14th 1924, fifty-days-old dog was sent to Dr. Ueno. And he was much loved by the new owner and named him Hachi.

In a short time, Hachi had grown into a splendid Akita dog. And he started to take Dr Ueno to and from the train station and created a strong bond between eachother.

However on 21st May, Dr. Ueno suddenly died during his lecture in a faculty meeting. Hachi was fed during the funeral, but he didn’t eat anything after that.

Even after Dr. Ueno’s death and even though Hachi had moved to Asakusa, Hachi running towards Shibuya station which was 8km away was often seen. It continued for a year. Kikusaburo Kobayashi, who lived in Yoyogi, sympathised with Hachi and he took care of him.

But every time as soon as Hachi finished his dinner, he wandered around his old house in Ueno which was 700 to 800 meter away. Later, he sat still in front of a ticket gate of Shibuya train station. And he kept doing that every day; on the hot days, rainy days, and even on snowy days.

Hachi was never violent to anyone or any other dogs. But his left ear was bitten by a dog and since then it has been hanging from his head.

Seeing the circumstances of Hachi, a lot of people including the staff of Shibuya station showed compassion and started to take care of him.

In 1935, Hachi was introduced overseas and his story was made into film becoming famous. However, he got filarial disease on 5th of March and he ended his 11 years of life (almost 70to 80years old in human years) three days later on the 8th March. Now Hachi rests in peace with Dr. Ueno in Aoyama cemetery.

The statue of Hachiko 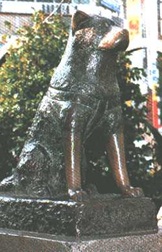 ~Statue in front of Shibuya station~

On 4thOct 1932, Hachi was reported on the Tokyo Asahi newspaper and other newspapers and radio. And he received a lot of money from people. In November of the same year, Hachi was invited to the Japanese dog exhibition and his name was known to whole of Japan with the honorific title, Hachi-Ko. In 1933, Hachi was recommended to join the Pochi Club asa honory member (World-wide organization of dog lovers) and in 1934, the story of Hachi was published in the text book of elementary schools.
As Hachi became famous, there were many voices of the residents living nearby to construct the bronze statue of Hachi. And in the new year of 1934, a prospectus for a statue of Hachi was created and they were collecting funds from all over Japan.
Due to the funds, a bronze statue, 162cm tall in the statue itself and 180cm for its basement, was constructed. On 4thApril 1934, an unveiling ceremony was held and about 300 people joined including the widow of Dr. Ueno, celebrities; the station master of Shibuya, Mr.Yoshinaga and Hachi.
On 20thMay 1934, the author of statue, Teru Ando, Emperor Exhibition Jury had conceded to the emperor and empress a statue of Hachi. (the same statue was donated to Mr. Houji Kimura who was from Odate. And in 2015, the family of the deceased donated it to the city of Odate.)
It was a unprecedented situation that the statues were made during his life time and even donated one of them to the imperial court. 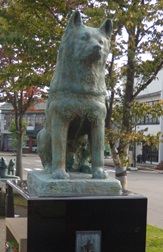 ~The statue of Hachi in front of the Odate train station~

Knowing the construction of Hachi’s statue in Tokyo, Mr. Houji Kimura became the proposer to build the same one in Odate. The volunteers constructed it in front of Odate train station and itsunveiling ceremony was held on 8thJuly 1935.
The statues of Hachi were loved by a lot of people. But they were withdrawn by the order of the government’s the Metal Collection Act during the pacific war.It was constructed and only existed for less than 10 years.
In August 1948, after the WWII, the statue was reconstructed in the Shibuya train station but it was not in the Odate.
In May 1964, the group statue of Akita dog with Hachi in the centre was constructed in front of the Odate train station.
In 1984, since the proposal of Odate tourism association, the committee for reconstruction of the bronze statue of Hachi was formed and they conducted fund-raising activities to gain money from all over Japan.
On 14thNov 1987, there was an unveiling ceremony of the new statue and stuffed Hachi attended.
10 months prior to the unveiling of the statue ceremony, a filming trip for the film “The story of Hachi” was held. And it impressed many of the people after the release.

Presently, there is a stone monument of Hachi’s birthplace in front of the house of Hichirouemon Saito in Odate, Ooshinai. 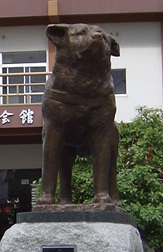 The basement of Hachi statue was left after the collection of metal act, and it was preserved at the head quarter of Akita dog’s preservation society. In October 2004, Hachi’s statue was finally reconstructed for the first time in 60 years. It was titled as “Hachi longing for his home” was constructed in the square of Akita dog hall.

This version of the statue has a motif of Hachi longing for his home and giving out an impression as if the dog is waiting for his owner to come back with a kind expression. It is said to be Hachi had never bitten or barked to any humans and puppies. But he was bitten once. Since then his left ear was hanging and it was shown in the statue too.

The faithful dog, Hachi is an Akita dog

Hachiko has a large body and a calm character.

In 1630’s, the landlord of Odate, Satake recommended a dog fight. It is said to be an Akita dog was a hybrid between Japanese traditional hunting dog and the local dog.

Dog fight was a major scene during Meiji and Taisho era. But the fight was prohibited because of its overheating popularity.

In May 1927, Mr. Izumishigeie, the mayor of the Odate town established a preservation of Akita dog society. This happened because crossbreed was becoming popular with turning Akita dog into fighting dogs. There are pictures of Akita dogs in Akita Inu Hall and they seemed to have different figures from early Showa era and today’s Akita.

In July 1931, Akita dog were designated as the natural monument among the other Japanese dogs. From 1934, Akita Inu Preservation Society started to register the dogs. In 1938, the standard of Akita dog were set and there were the exhibitions held too but it was suspended for a while because of the pacific war.

In the aftermath of the war, there was a difficulty in the preservation of the Akita dogs. But dozens of the Akita dogs had good pedigrees with the effort by the dog lovers. Quick reproduction of the species was seen and bred all over Japan again. In 1977, 'Akita-Inu Hall' was established in order to celebrate the 50th anniversary since the foundation of the Akita Inu preservation committee. It is valued very much because it is the only museum out of all the Japanese dog breeding organisation.

We’ll introduce some here but maybe there are more?

《 Stone statue of Hachi in front of the house that he was born in》
[ Odate city, Ooshinai, in front of Saito’s house ]

[ Next to Omachi Akashi Building ]