Old Dog Shrine is on a hillside of Kuzowara in Odate City (the easternmost part of former Satake territory that is close to Dobukai, the territory of former Nambu). This shrine had been burned down on July 18th in 1936, and the reformed one remains here. There is a story about the dog called “Shiro” and it is enshrined and said to be a true story. The hunting license that appear in the story still remains in the modern day.

The sad story of Sadaroku and Shiro

Once upon a time, there was a Matagi (traditional Japanese hunter) called Sadaroku and he was given a special license to hunt from the lord (it allowed him to do hunting in the other territories and even within a shrine’s ground). He had a dog called Shiro which was his good partner in hunting.

On a cold winter day, Sadaroku and Shiro were chasing after a escrow. They passed the border to the Kazuno-Sakai and they reached closer to Sannohe Castle. But he was disappointed because he missed his game. Then, as he was to return home, he was suddenly surrounded by several men. They were the officers of the Sannohe territory. They came to capture Sadaroku with a criminal charge for shooting within their territory. Sadaroku tried to pull out his license to show his right to hunt. However, Sadaroku just realized that he forgot it on that particular day. He tried to explain the situation that he was in. But effortlessly he was put into jail.

Sadaroku repeatedly told Shiro to go home and to bring the hunting license. Shiro followed his instructions and went home.
As soon as Shiro got home, he started barking restlessly at Sadaroku’s wife. But she didn’t understand what Shiro was trying to tell her.
Shiro came back to the jail again. And Sadaroku repetitively told Shiro the place of the hunting license. Shiro went home again surpassing the wildness without any rest. And this time he barked in front of the Buddhist altar. Then finally, the wife realized and remembered about the hunting license and immediately she tied it onto Shiro’s neck.
However, when Shiro arrived at the jail, Sadaroku had been executed already and his corpse lay on the ground mercilessly.

From that night on, every day and night, Shiro’s sad howling were heard in Sannohe castle and its town. Soon, a natural disaster occurred in this area and everyone who were involved with the death of Sadaroku died tragically

Later on, the wife and Shiro were expelled and they moved to Kuzowara that was close to Akita-Ryo-Zyuni-Syokan (current Odate city).
Since sometime, Shiro disappeared and later a skeletonized corpse of Shiro was found in a hill nearby. From then on, every time when the samurais on horses try to pass over the hill, the horse get out of control unexpectedly and the samurais fall off and get injured. So the villagers feared that those were Shiro’s grudge and to pray for the repose of Shiro’s soul, they built a shrine on the mountain.

Subsequently, the people from this area have been passing down this tragic story to later generations and still showing and keeping the affection for Shiro.

At the Old Dog Shrine, the annual festival is carried out in order to pray for: prevention of natural disaster, huge harvest, family safety, or traffic safety. The ‘Hongu Festival’ is open to public. 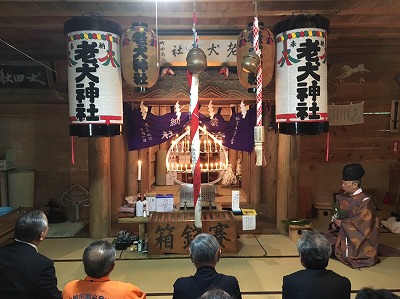 The dates written above are the usual dates. However, it may vary.

It is a video that was taken and shown in ‘The New Japanese Fudoki: Japanese Dog’.

You can look at a map from the link/URL above.