Schedule: Every year on the second Saturday of February and the day after.

※There will be traffic restriction near the site.

Amekko-Ichi originated in 1588 and it is been said that “if you eat the sweet on this day, you will not catch a cold”.

It used to be a local custom event and it had been held since 1972 on Omachi Hachiko Street.

There are events such as ‘Shirahige Ookami Junko (Shirahige God Parade)’ and “Akita-Inu Parade” to perform that God is coming to buy sweets from the highest mountain in Odate city, Tashirodake.

At the venue, there are plenty of stalls that sell lollipops and sweets which attracts tourists from in and out of Akita prefecture. There are customs to eat sweets all over Japan. Due to the oldest record, this custom started when a lollipop was made to offer at the altar instead of ears of rice. In Odate’s area, it is been said that they used to drive evil spirits away by eating sweets.

Initially, since 1588 a market was held and at the same time this fair was organised too.

Omachi Hachiko Street is filled up with approximately 100, 000 tourists who come to buy sweets from street stalls.

Odate city is a hometown of faithful dog, Hachi, and where the head quarter of Akita dog’s preservation society is located. Countless number of tourists and dog-lovers enjoy the Hachiko parades and the opportunities to touch Akita dogs. 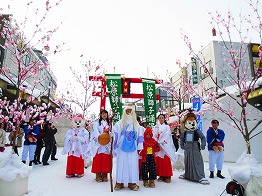 As a legend, it is been said that there is a snowstorm on the day of Ameko-Ichi. After Shirahige Ookami (Shirahige God) finishes buying sweets, it will snow on his return journey so the snow can hide his footprints.

During this Amekko-Ichi period, surprisingly it snows often and it is still held although it snows heavily.

It is a story about a girl named Okou, who created medicated sweets. She had a dream of Shirahige God guiding her to make it so she could help the people with illness.

The events on the day ※ There may be some changes due to weather conditions. 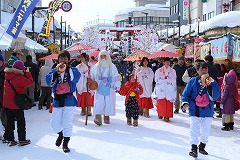 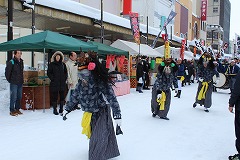 the corner to touch Akita dogs. 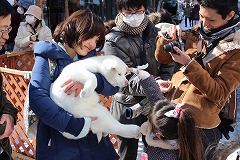 Marumage Queue (going back and forth on Hachiko Street ) 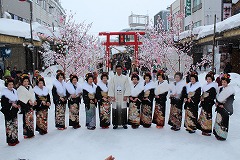 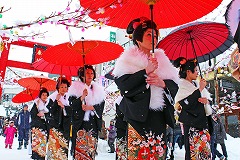 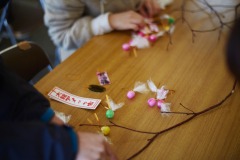 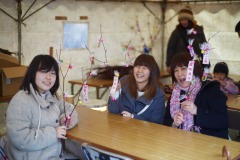 On-the-spot sales of sweets. [Nearby the Shrine, Executive Committee Store] 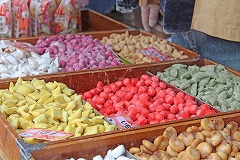 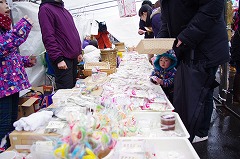 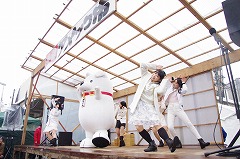 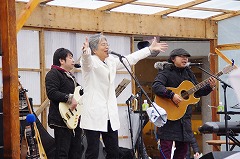